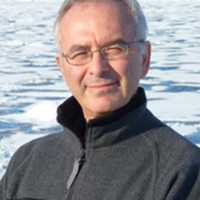 Bob Reiss is a best-selling author of 20 books, as well as a journalist, a former Chicago Tribune reporter, and former correspondent for Outside Magazine. His work has been published in The Washington Post, Smithsonian, Parade, Rolling Stone, and other national publications. From 2012 to 2013, he worked as a consultant on Arctic issues for 60 Minutes on CBS. In 2010, Reiss co-produced his first investigative segment for national television, for PBS’s Need to Know. Reiss’s nonfiction books include The Eskimo and The Oil Man, The Coming Storm, and The Road to Extrema. He has published 15 novels including The Washington Post best-seller The Last Spy and the European best seller Black Monday. His new series of science-based thriller novels launched earlier this year with the publication of White Plague, about a US submarine trapped in the Arctic. Protocol Zero will follow. This series will be published under the pseudonym of James Abel.