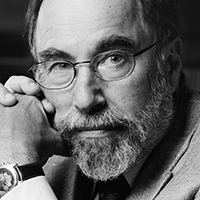 After serving as President of Caltech for nine years, David Baltimore was appointed President Emeritus and the Robert Andrews Millikan Professor of Biology (2006). Awarded the Nobel Prize at the age of 37 for research in virology, Baltimore has influenced national science policy on such issues as recombinant DNA research and the AIDS epidemic. He is a researcher, educator, administrator and public advocate for science and engineering and is considered one of the world’s most influential biologists.

He received his Ph.D. in 1964 from Rockefeller University, where he returned to serve as President from 1990-91 and faculty member until 1994. For almost 30 years, Baltimore was a faculty member at MIT where his early investigations examined the molecular processes underlying the ability of poliovirus to infect cells. This led him to a consideration of how cancer-causing RNA viruses manage to infect and permanently alter a healthy cell. Baltimore shared the 1975 Nobel Prize in Physiology or Medicine for a discovery, which provided the key to understanding the life-cycle of retroviruses such as HIV.

Baltimore has contributed widely to the understanding of cancer, AIDS and the molecular basis of the immune response. His present research focuses on control of inflammatory and immune responses, on the roles of microRNAs in the immune system and on the use of gene therapy methods to treat HIV and cancer in a program called “Engineering Immunity”. He is Director of the Joint Center for Translational Medicine, a collaborative effort joining Caltech and UCLA in a program translating basic science discoveries into clinical realities.