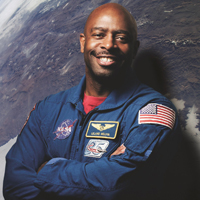 A former wide receiver for the Detroit Lions, Leland Melvin is an engineer and NASA astronaut. He served on the space shuttle Atlantis as a mission specialist and was named the NASA Associate Administrator for Education in October 2010. He also served as the co-chair of the White House’s Federal Coordination in Science, Technology, Engineering, and Mathematics (STEM) Education Task Force, developing the nation’s five-year education plan. He is the host of the Lifetime show Child Genius and a judge for ABC’s BattleBots. He holds four honorary doctorates and has received the NFL Player Association Award of Excellence. He lives in Lynchburg, Virginia.