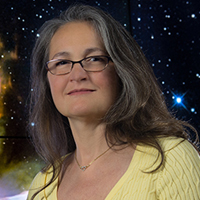 Astrophysicist
Padi Boyd is the project scientist for the Transiting Exoplanet Survey Satellite (TESS) Mission (a NASA Explorer Mission launched in 2018), and chief of the Exoplanets and Stellar Astrophysics Laboratory in the Astrophysics Science Division, at NASA’s Goddard Space Flight Center. She has been at NASA since 1993, when she was a member of the Hubble Space Telescope instrument team, studying active stars, X-ray binaries, pulsars and active galaxies. She has had roles on a variety of NASA astrophysics missions, including the Rossi X-ray Timing Explorer, the Swift Gamma-ray Burst Explorer, and the Kepler mission, which discovered thousands of planets orbiting other stars (exoplanets). Her research interests focus on applying traditional and novel data analysis techniques to discover exoplanets, and understand their parent star’s environment. She also explores the drivers of stellar variability, and black holes in stellar binaries and active galaxies, using data from a variety of space telescopes.