CITY OF SCIENCE: Hands-on Science Activities for You and Your Kids 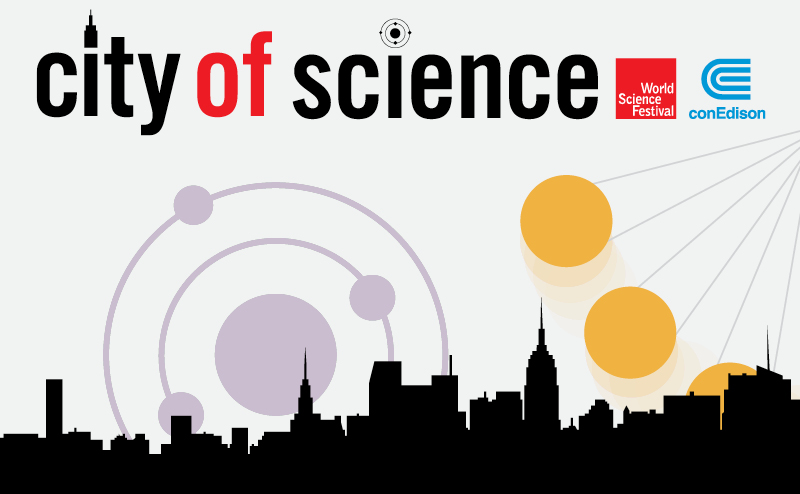 City of Science is FREE and open to the public. RSVP not required, but encouraged. RSVP HERE!

This program is presented by Con Edison.

Join us for a full-day of interactive science exhibits featured throughout Washington Square Park and the NYU Kimmel Center.

braiNY: Trick your senses, test your memory, and play with your brain with neuroscientists.

CREST Institute, City College of New York: Try your hand at tossing a globe into a bucket while rotating on the Coriolis spinner.

DiscNY: Take control of a zero gravity toys and learn about the forces in frisbee

IceCube Neutrino Observatory: See how the biggest and strangest telescope in the world explores the universe with signals from ghostly neutrinos.

Jupiter Joe’s Sidewalk Astronomy: Learn about the solar system and robotic space exploration in an out of this world experience.

Know Science
Exploring the science of movement with the latest technology behind motion capture and next generation video games.

Lamont-Doherty Earth Observatory: Explore the deepest interior of Earth to the outer reaches of its atmosphere while getting your hands dirty with volcanoes, meteorites, and more.

LIGO Scientific Collaboration: Learn how gravitational-waves are detected, and whether we can detect light simultaneously from the same cosmic source.

Me vs. Animals: Jump as far as a grasshopper or jack rabbit; then compare your feet to a T-Rex footprint.

Molloy College/CERCOM: Meet living fossils, horseshoe crabs, and learn how they are important to human health and to the conservation of migratory bird species.

NYU Materials Research Science and Engineering Center: Explore crystals and their structures under a microscope, including a Do-It-Yourself microscope.

Pendulum Wave: Marvel at the unexpected patterns at this massive kinetic sculpture that explores wave theory.

Pre-K for All: Create giant bubbles.

Rotation Station: Test out gyroscopes and spinning stools and learn about angular momentum.

Science Squad: Participate in competitions throughout the day to build a large Human Electrical Circuit, see who untangles first in a game of Infinity rope, and who can Hula Hoop and balancing birds the longest.

Seismic Accelerator: Send a stack of balls into orbit while conducting Conservation of Energy experiments.

The Domino Effect: Knock over huge dominoes and learn about chain reaction.

Tug of War on Wheels: Test out your strength or science knowledge in this interactive game that teaches Newton’s Third Law/

Walking on Water: Take of your shows and discover if you’ll sink or walk on water…a 10-foot long tank of Non-Newtonian Fluids.

Warped Space Gravity Simulator: Send planets and stars into orbit and play the simulator game in this demonstration of Einstein’s Theory of General Relativity.

Backyard Wilderness Eco Projects: Take a guided stroll through Washington Square Park, explore what kinds of birds, insects, and trees live in this urban oasis, and learn how to use the iNaturalist and SEEK apps to become an urban citizen scientist.

Water Bottle Drop: Drop bottles of water with holes to see what happens and learn why this was Einstein’s happiest thought.

Wildlife Conservation Society: Track animals in the wild, while experimenting with shark tagging and camera traps.

Women in Science at NYU: Discover fossils and learn about the difference between a rock and stone tool.

Visit the City of Science Main Stage on Garibaldi Plaza in Washington Square Park and check-out some of the coolest demos, experiments, and scientists.

12:00 PM — Astronaut and Aquanaut: Fact or Fiction with Jennifer Swanson

2:30 PM — The Amazing World of Bees with Lynn Brunelle