How Accurate Are Weather Forecasts?

Weather forecasting is the classic inexact science, relying on the complex mutual interactions of wind, currents, precipitation, tides, humidity and temperature variations, and a million other variables across a planet that’s rotating on its axis, revolving around its heat source, and tilted with regard to its plane of revolution. To say forecasting the weather is tricky is putting it mildly indeed.

In fact, it was while working on weather prediction that mathematician Edward Lorenz began to conceive Chaos Theory, the mathematical theory which says some systems, highly sensitive to initial conditions, are simply too complex to be predictable over the long term. Weather is the poster child for chaos theory: Its most famous idea, the “Butterfly Effect,” posits that a butterfly flapping its wings in South America could have far-ranging repercussions for future weather around the world, like a tornado in Texas.

But weather forecasting is too important to be left to chance, and humans have been doing our best to predict the weather throughout history. How much closer have our sophisticated technology and global communication advances brought us to useful predictability? We decided to investigate.

Weather prediction stayed amateurish and local until the telegraph became widely available in the middle of the 19th century, letting local weather forecasters share their observations from all over the world, displaying this parallel information in “synoptic” weather charts, so people could see the weather occurring at the same time in different places. For the first time, predictions of large-scale moving fronts was fact-based and reliable.

The first U.S. national weather forecasting service was formed in 1870, in response to the need for storm warnings on the Great Lakes; by the 1930s weather balloons were dotting the sky, using radio waves to relay high-altitude readings and general weather patterns back to forecasters on the ground.

Today, a network of more than a thousand operational weather satellites feeds the forecasters of the world, carrying a wide array of sensors utilized in different ways.

Geostationary satellites circle the Earth from west to east, in the equatorial plane at an altitude of about 22.5 miles, matching the pace of the Earth’s rotation so as to stay above the same spot on the equator. These satellites provide a continuous view of the hemisphere from their position, feeding invaluable realtime information about the rapid condition shifts that occur during thunderstorms, hurricanes, and fronts.

Polar Orbiters are low-flying, circling the Earth in roughly north–south orbits at much lower altitudes (from 310 to 620 miles above the surface). Each orbiter flies the same path twice a day, and their relatively low altitude provides extremely high-resolution images and extremely specific atmospheric conditions, making predictive patterns far more accurate.

Radar began to emerge as a meteorological tool in the 1930s, providing excellent views of raindrops at certain wavelengths. At the local level, radar made it possible to study the evolution of thunderstorms, “see” their precipitation structure, and track their progress. Today, vitually all tornadoes and severe thunderstorms in the United States and around the world are monitored by radar, charting their characteristics and severity.

Today’s high-end weather prediction systems typically employ “Doppler Radar,” which takes advantage of the Doppler effect to track storms and other moving phenomena. As a Doppler radar antenna turns, it emits short bursts of radio waves called “pulses” through the atmosphere. When the wave hits moving objects, it reflects back toward the source, which also contains a receiver as well as the original transmitter; by measuring the shift in phase between a transmitted pulse and the received echo it creates, the moving object’s radial velocity (the movement of the target directly toward or away from the radar) can be calculated. In the aggregate, this data can be expressed as those familiar swirling depictions of weather patterns, and allows detailed analysis of their growth and movement.

From the ‘60s through today, the increasing power and ubiquity of high end computer system has allowed a quickly improving ability to process these vast data sets.

Numerical weather prediction (NWP) involves constructing a three-dimensional grid of the atmosphere using data on the atmosphere’s current state, and using a mathematical model to predict its evolution into future states. Taking readings on the temperature, humidity, barometric pressure, wind speed and direction, and precipitation for each point on that grid, and repeating that process every 10 minutes or so, provides a stream of data that feeds into mathematical algorithms that seek to predict future states. These algorithms’s success is later analyzed, and revised to improve predictive quality over time.

Those methods have become fairly reliable in short-term forecasting of one to three days: If the weatherman calls on Thursday for weekend rain, cancel that picnic. But for longer-range forecasting, chaos theory suggests that this extremely complex system, so dependent on early conditions, starts to diverge quickly, and the fifth or sixth day of that ‘Seven-day forecast’ is significantly less reliable than the third and fourth.

Long-range forecasters prefer a climatological approach, focusing on a broad weather picture over a period of time rather than attempting to pinpoint daily details. Forecasters must then employ a process known as “ensemble forecasting” that takes into account multiple models, which can be inconsistent over time and therefore unpredictable in the specifics. They try to predict the departures from normal conditions over a given period of time, and display these on an ‘anomaly map.’

Of course people are people, and demand to know whether it’ll rain at their wedding two weeks from Sunday, even if it’s implausible. The weather world tries to comply, and that’s how you get to Doppler offering a “25-day forecast.” Josh Rosenberg did a study checking the validity of his region’s, and as you can see from the chart below, it’s not a pretty picture; with the very best technology has to offer, predictions that we would call “good” don’t begin to emerge until about five days prior. 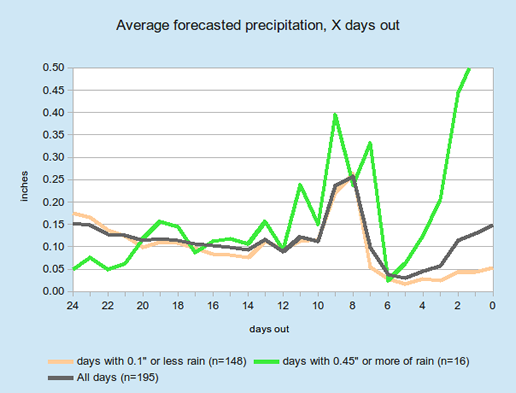 So while time and technology have greatly enhanced the accuracy of forecasting, the pace of advance has slowed to a crawl of minor incremental gains. Like the economy, another extremely complex system, the weather has yielded its secrets about the here and now, but this extremely complex system is resisting our efforts to accurately predict the future.