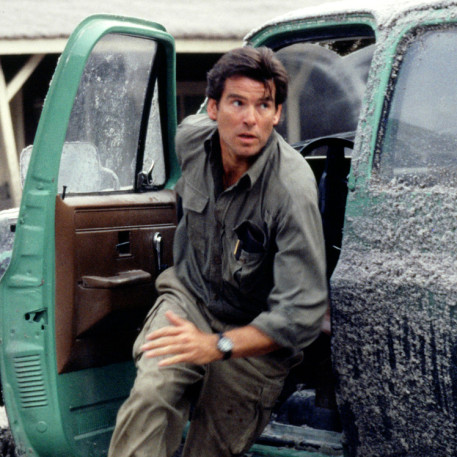 In the 1997 film Dante’s Peak, the volcano is really the star, stealing the show from all the merely human subplots of romance, stubborn grannies, and the inevitable dog that needs to be rescued.

Our human protagonist, Harry Dalton (Pierce Brosnan), is a lone, workaholic volcanologist who gets sent out to the Cascade Range in Washington State by the U.S. Geological Survey to check up on a mountain which has been rumbling. The town on the slopes of Dante’s Peak has just been honored with the “second most desirable place to live in the United States, population under 20,000″ award and the mayor (soon to become Harry’s love interest) has done a great job in making the town a prosperous, happy place to live. It’s the perfect setting for a natural disaster.

Harry soon finds signs that the supposedly dormant Dante’s Peak volcano was awakening, and calls in a team from the USGS to monitor the volcano more carefully. From here, the movie does a really great job of depicting the difficulties that arise during a volcanic crisis. Not all the scientists agree that Dante’s Peak is something to worry about. Harry’s boss alludes to a crisis at Mammoth Mountain in California, where the USGS was monitoring a volcano and considering putting the town on alert—except in this case, nothing happened and the town’s tourist industry was devastated.

This really happened in the 1980s, when geophysicists found signs that Mammoth Mountain was awakening from slumber. A series of small earthquakes began rolling through starting in 1980; by 1982 geophysicists were seeing other characteristic signs of volcanic activity: new steam vent development, and bulges in the surface of the caldera (a formation usually caused after a volcano collapses into a magma chamber emptied by a previous eruption). The scientists prepared to issue a warning to the town, the LA Times got wind of the concern and broke the story before the USGS had fully worked out its communication strategy. The result: a hasty warning issued just before Memorial Day, a media circus, and lingering anger towards the scientists when nothing happened.

Predicting a volcanic eruption is not a simple formula. There are certain signals of activity that can be monitored at volcanoes, but interpretations can often be contradictory, especially if these signals are only monitored when you think a volcano might be reawakening. So scientists will differ as to whether or not they should put a town on alert when they start seeing signs of volcanic stirring. Dante’s Peak captures this well, and gets most of the monitoring techniques correct—although sending a robot into a volcano’s caldera isn’t a particularly common method. You also can’t tell how recently a volcano erupted by looking at a rock, like Harry does at one point. Dating rocks is a long and complicated process involving detailed lab work. (The film also captures the over-dependency most scientists have on coffee particularly well!)

Most of the individual volcanic phenomena shown in the movie are relatively accurate. Volcanoes do release gases which can kill vegetation and wildlife and can even turn lakes acidic. The lake at the foot of Mt. Pinatubo in the Philippines had a pH of around 1.9 after that volcano erupted in 1991. However, the speed of the transformation of the lake from picturesque boating spot to deadly acidic lake is ridiculously fast. Other worrying signs that a volcano may erupt include earthquakes, though volcanic earthquakes are not normally strong enough to fell buildings like they do in this film. At one stage Harry yells that the earthquakes are magmatic, not tectonic, which would be an important distinction. But there is no way to tell what kind of earthquake it is by feel and this can only be done by studying the data collected on the seismographs at their makeshift volcano observatory.

Once the volcano starts erupting, we are treated to incredible special-effects portraits of volcanic phenomena, starting with a beautiful eruption column that rises up several kilometres into the sky. Put this scene next to a scene of a real plinian volcanic eruption and you’d be hard-pressed to tell the difference. A plinian eruption is the biggest kind of eruption volcanoes can undergo, and it occurs at volcanoes that have a particular type of magma such as andesite or rhyolite. This type of magma is very sticky and produces lava which doesn’t flow very fast or very far—which is not like the lava that comes gushing down the side of Dante’s Peak, destroying an old granny’s house and forcing our heroes to brave the acidic lake in a boat (which would not dissolve as fast as shown in the film). The lava depicted in this film is much more like the lava seen at volcanoes that have basaltic magma, as seen in Hawaii. Volcanologists also wouldn’t drive through lava; that stuff reaches temperatures of up to 1000°C, so it would quickly melt your tires and ignite your gas tank.

The most climactic scenes in the film are where we see the incredibly destructive force of pyroclastic density currents and lahars. Pyroclastic density currents are flows of gas, ash, pumice and rocks which can travel at speeds of up to 450 mph and can be as hot as 1000°C. These flows were responsible for the destruction of Pompeii in AD 79, and flattened the forests around Mt. St. Helens in 1980. These are portrayed really well in the film—so well in fact that I often play this clip to my students. However, pyroclastic density currents don’t tend to have flaming blocks of lava shooting out of them. In fact, lava and volcanic rocks aren’t ‘on fire’ at all, though they tend to set things alight due to their high temperatures. It’s also highly unlikely that you can out-drive these currents, as Harry did in the film.

Lahars, another effect shown in Dante’s Peak, are volcanic mudflows and occur when an eruption melts a mountain’s snow cap, or when the ash and pumice from an eruption mix with rainwater or rivers. In the film, the scale and physical characteristics of lahars are captured really well, though you could argue that they should have occurred much earlier on in the eruption. The lahars in the film destroy bridges across the river, as they do in real life. In 1953, a lahar at Mount Ruapehu in New Zealand destroyed a railway bridge as a train was crossing it, resulting in 151 deaths and New Zealand’s worst railway disaster.

Overall, Dante’s Peak is probably the best volcano movie out there. It dramatizes the real-life problems that scientists and communities face when a volcano becomes active. The film depicts many of the different volcanic events really well (though it mixes up types of eruptive style) and captures many of the real volcanic hazards that exist around the world.