The Science Behind the Winter Olympics

Played at its highest competitive level, sport is a beautifully choreographed dance with danger. It’s pure entertainment for those of us watching from home, but the athletes showcasing death-defying feats at the 2014 Winter Olympics are employing core scientific principles to squeeze every last iota of efficiency out of their performance. Here are a few examples of how science takes these athletes to the very top of their game. 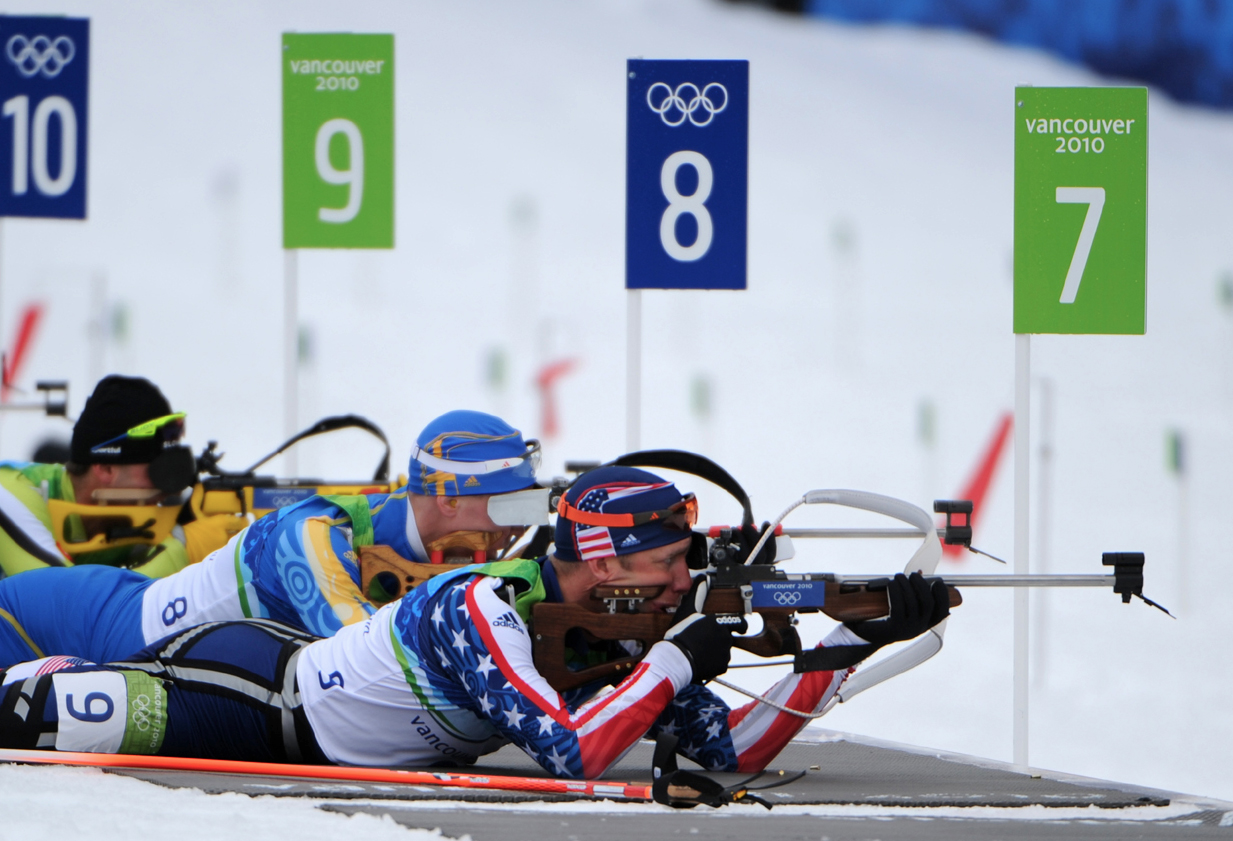 Imagine skiing for 15 kilometers (over 9 miles), and when you finish, you have to shoot five targets that are 50 meters away (just under 165 feet). And if you miss, you must ski a 15 meter penalty per missed shot. Now imagine doing all this in the frigid cold.

Welcome to the biathlon, the most James Bond of all Olympic sports. It’s been a men’s event since 1955, with women joining the fray in 1984. As strange as it may seem today, the biathlon was derived from military and hunting practices—it’s actually a practical combination of skills in places like snowy Norway. The one-two punch of skiing, then shooting requires extreme cardiovascular exertion followed by intense focus to quickly calm the aim-threatening effects of that exertion.

Exercise is all about muscle movement, and muscles need energy, in the form of oxygen—this is why you breathe so hard on the treadmill. When oxygenated blood reaches the muscles, it combines with the chemical adenosine triphosphate, or ATP, to produce energy. As you work out, your body burns the energy, and sweats away the metabolic waste produced (carbon dioxide and lactic acid) and expend heat.

Precision aiming demands immobility and calm; military snipers sometimes claim they try to shoot between their heartbeats, which is possibly overstating it. For the biathlete, the skill lies in beginning target practice at a severely compromised moment—the height of a workout. When a biathlete reaches his first target, his heart rate is around 200 beats per minute. In seconds, he must get it down to around 140 bpm, in order to steady his hands and focus enough to hit the targets, before returning quickly to the trail. It is an incredible feat of stamina, technique, and self-control. 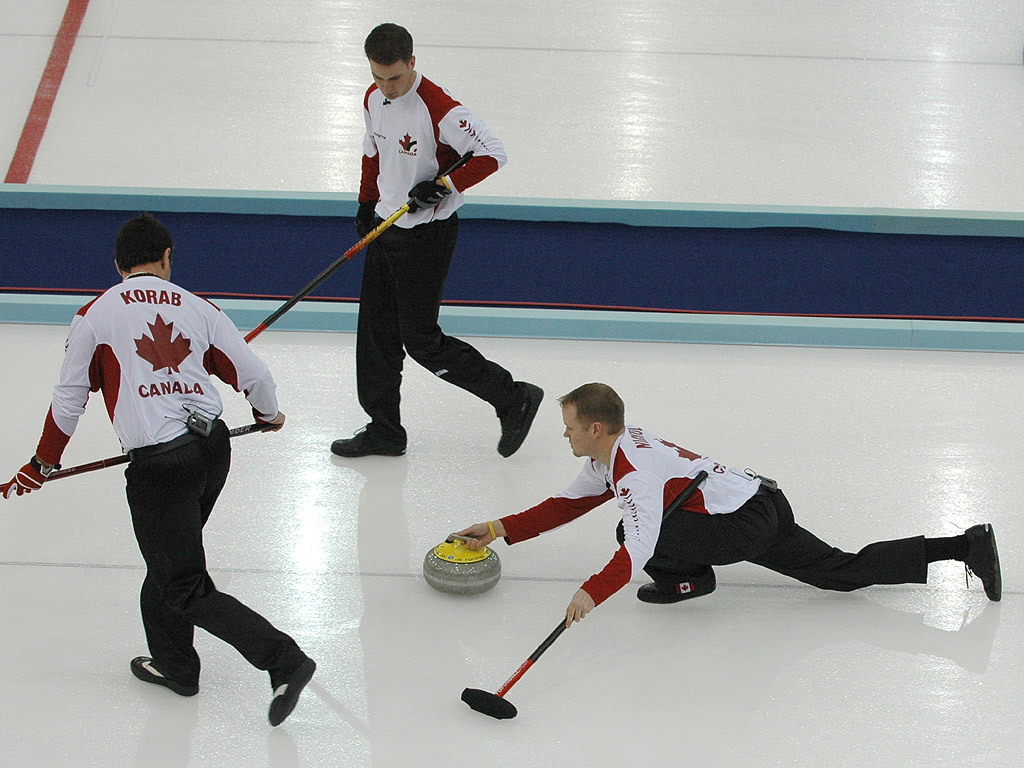 Curling: The Fine Art of Friction

Though it’s been around as a sport since the 1500s, curling remains under the radar as an Olympic event. But the sport, which is something like a mix of shot put, hockey, and chess, is as close to a physics experiment as sports gets.

What is curling? A shooter launches this large standardized weight (the “rock”… curling rocks are made of 42 pounds of granite, always from the volcanic island of Ailsa Craig off the coast of Scotland) along a horizontal sheet of ice toward a target (the “house”). As the rock glides toward the house, two “sweepers” jog alongside, keeping the rock moving briskly by scuffing up the ice ahead of it with brooms. The goal is to get the rock as close to the center of the target (the house) as possible, without shooting past it.

Here’s what’s going on from a physics perspective. By sweeping back and forth ahead of the stone’s travel, the sweepers are generating heat, which melts the ice just enough to create a film of water in the rock’s path, lowering the friction between the rock and the ice. Sweeping literally creates a path of least resistance.

There’s more. The ice surface in curling, alone among rink sports, is roughened on purpose. Before the game, water is sprayed over the rink and the droplets freeze, creating a bumpy surface for the stone to ride along. Rather than slowing the stone down, the bumps reduce the amount of surface area the stone is in contact with, which lowers friction and keeps the stone gliding along; it also negates any potentially slowing “vacuum effect” a smooth stone gliding along a smooth ice surface might trigger. 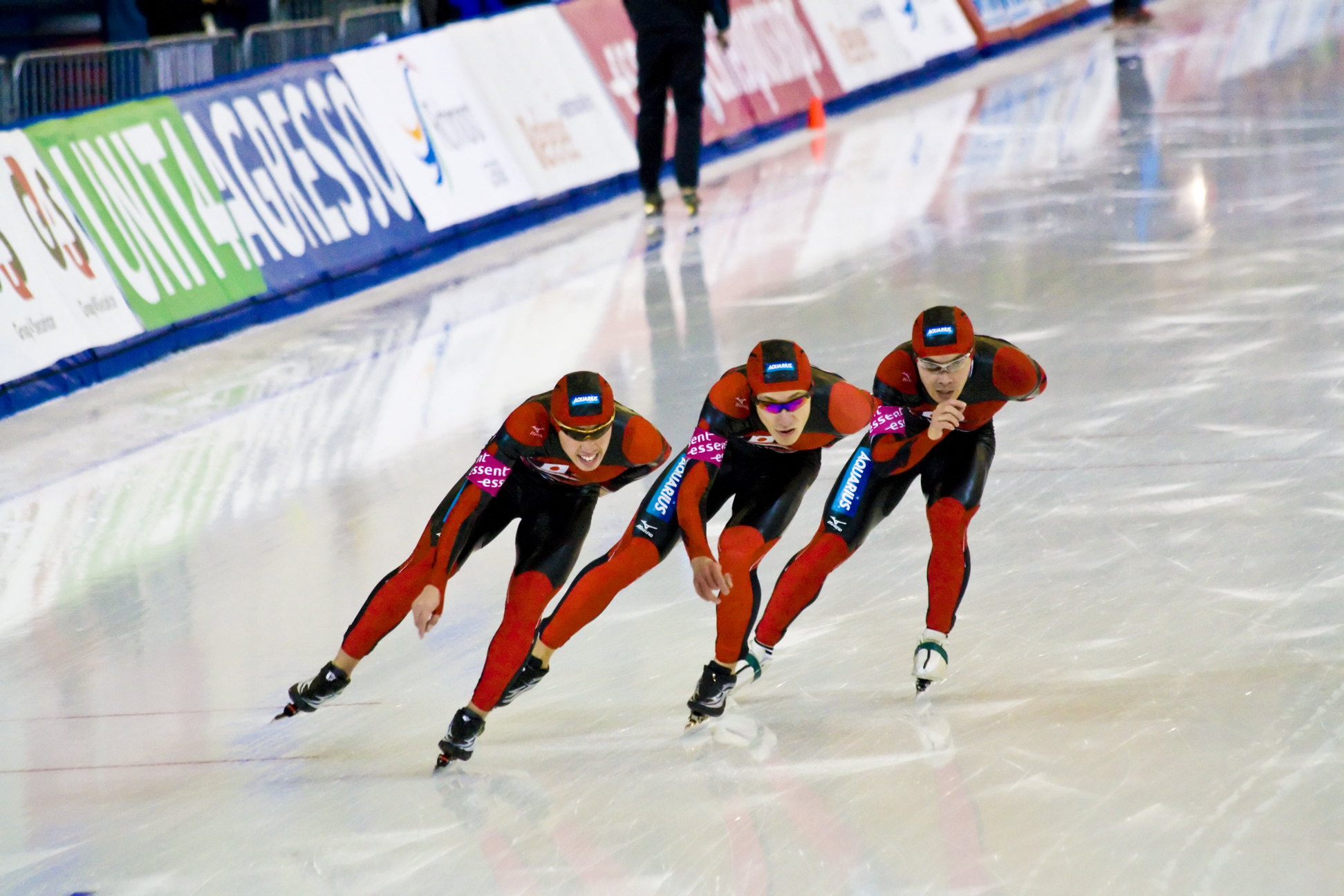 When a speed skater rounds a curve, he leans into it; he is driving his skate into the ice at an angle. As Newton’s third law states, every action has an equal and opposite reaction: The ice pushes back on the skater. The skater entering a curve is pushing down and out, causing the ice to push up and in. That portion of the force pushing the skater in, toward the center of the circle his skates are describing, is called centripetal force.

Opposing this centripetal force is centrifugal force—in this case, the inertia of the skater’s body which, once in motion, wants to keep moving in a straight line. This opposition is seen most dramatically when pairs skaters are locked in a mutual spin, the so-called death spiral. One skater is in the middle of the rotation in a pivot position, tightly holding the hand of his partner, who spins around him, stretched out almost parallel to the ice. He functions as the axis point and provides the centripetal force, pulling her in. Her body responds with an equal and opposite reaction, and feels as if she’s being pushed out (which helps with that straight, horizontal posture), creating tension in their hand grip. If they let go, his centripetal force stops acting on her body, and she glides away on a straight inertial path.

Inertia also explains how a figure skater can increase her spinning speed by pulling her arms in when she’s spinning. For a rotating mass, inertia equals mass times the radius squared. The radius—the distance mass is from the axis of rotation—has an outsize effect on inertia, and shortening that distance even a little greatly increases the angular velocity, the speed of the skater’s rotation. By pulling her arms in, the skater shortens the distance of some of her mass from the axis, increasing her rotational velocity, and dazzling the crowd. 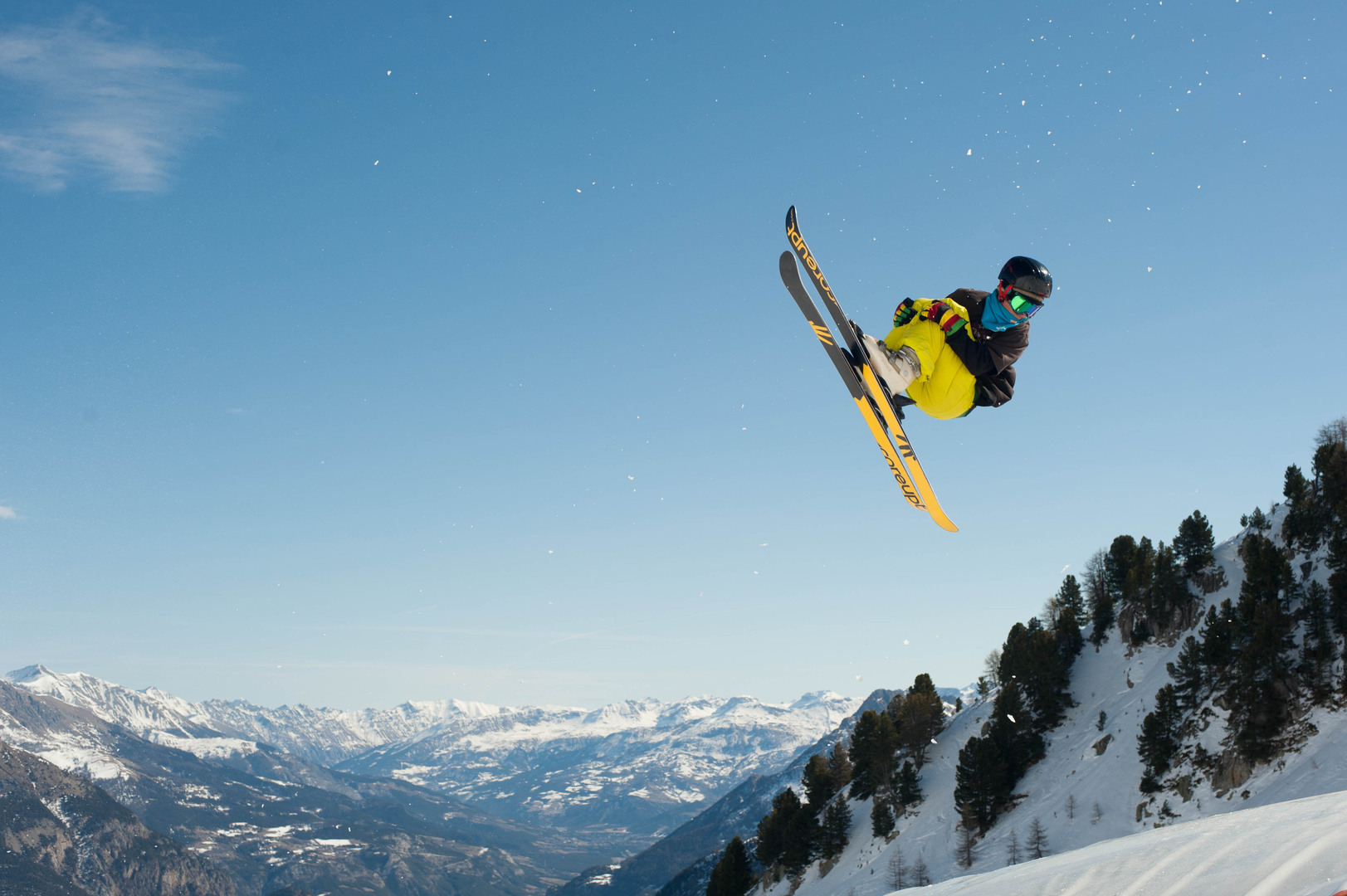 It’s easy to ski jump badly: You just ride down a track and launch into the air, where you fly roughly two football fields before hitting ground again. But it takes a series of very precise movements to achieve optimum distance—and stay safe.

Ski jumpers hold two positions in the course of a run. Heading down the track, they crouch, folding their upper torso down into a tabletop position over their lower bodies, with arms held behind. This minimizes drag due to air resistance, helping them reach maximum speed.

Once the skier launches from land to air, however, a new strategy is called for, and he changes as quickly as possible—in just a tenth of a second—into a straight body position, with his skis angled in a V below. The airborne ski jumper no longer wants to minimize air resistance, he wants to take advantage of it—specifically lift, the force of the air pushing him up, and extending his jump. Planes take off using this principle, with carefully shaped “airfoil” wings that maximize this effect; it’s the upward force you feel when you extend your hand out the window of a moving car and angle it up into the oncoming wind.

Catching air got an extra boost with the now ubiquitous V-formation, in which skiers cross their skis in a V shape beneath them in the jump. As athletes fly through the air, their skis and body weight push down on the air below, which in turn (Newton’s third law of thermodynamics) pushes back up. A jumper’s speed reduces air pressure above his body relative to the air pressure below it thanks to Bernoulli’s Principle. This acts as a lifting cushion that helps keep the skier aloft, and lift is directly related to surface area—the greater surface area the greater the lift. The V-style is more effective because it expands the lower surface area of the skier, and provides more surface (the body and the widely extended skis) on which the higher pressure air can act.

Interestingly, this formation didn’t become popular until the 1990s. Prior to that, most skiers held their skis parallel in front of their chests, for style reasons. The first skier to try the V-style in public was a Swede named Jan Boklöv, who was simply trying not to crash. During a training jump in 1984, Boklöv felt himself going off balance and split his skis into a V in an attempt to force a landing. Instead he found himself carried through the air longer, and a new style of jump was born. It took awhile for the impact of the V-formation to be reflected in winning titles, however, because skiers initially lost points for poor form when using it.

Ski racing is different; don’t be confused when you see ski racers curl into a crouched position on a jump. Ski jumpers are trying to maximize distance, but ski racers are trying to maximize speed, and the skier is actually faster on the ground. By putting herself into a crouch position while airborne, she is creating a great deal of air resistance, allowing her to fall more quickly, and get back on the slope, where her speed can take over again.