Our ancestors pass along their beliefs, their stories, and their DNA—and we are only just beginning to understand the impact of genes passed down through generations. In her rich new book, The Invisible History of the Human Race: How DNA and History Shape Our Identities and Our Futures

, Christine Kenneally explores the history of genealogy and ancestry, and what we’ve learned about ourselves through advancements in genetics. We had a chance to speak to Kenneally recently about the many legacies of our ancestors. 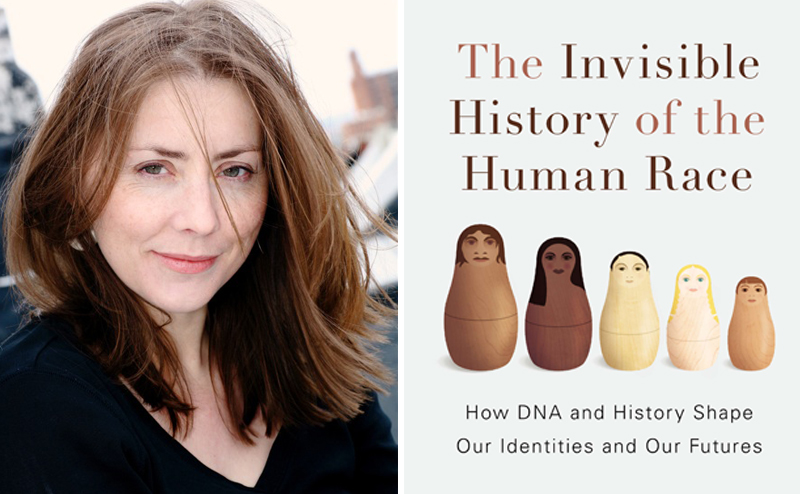 World Science Festival: You begin this book on a personal note, discussing your great-great-grandfather’s sentence to the British penal colony Van Diemen’s Land (now Tasmania); later you talk about learning your father was raised by his grandfather. Was your motivation for this book always linked to your own personal history?

Christine Kenneally: Absolutely. I started writing the book because I find all these questions about the past and what gets passed down completely intellectually fascinating. My last book was about evolution. It was a much larger history. This book looks more closely at human history and how these things that get passed down affect our lives.

I was about a year into the book and I started to struggle a little bit because I was finding it challenging to write in a way that would elicit that kind of response in people—I wanted readers to feel as emotional about this science and this history as I do. The way I solved that problem was to pause and reflect about why I personally care about all of these things.

WSF: Throughout the book, you mount a defense for genealogy and the study of ancestry, while acknowledging that many people remain wary of these fields. Can you speak a bit about the perceptions and misperceptions?

CK: I’m mounting a defense of our right or our ability to ask about the past. I think it’s the general predisposition that makes people uncomfortable, whether it comes up in these concerns about genealogy or in these concerns about genetics. It’s the same anxiety. And once you start scratching the surface and question why people might have extreme or seemingly unreasonable reactions, you find that there is this history of terrible misuse, of both genealogy and genetics. The eugenics problem we see at its most vivid in Nazi Germany, when huge numbers of people were exterminated for these false and foolish ideas.

There’s that history and that transfers across to the issues of genetics as well. There are these concerns that if we find signs in the genome of people’s ancestry or race, it will be used against people.

WSF: Do you have a sense that the perception of the field is changing? Are advances in gene therapy helping or hurting the cause?

CK: I think there’s a growing positivity around all of this. There are all these incredible advances and an absolute crucial cog in the process of creating a positive perception is that this information is being spread out—from science writers, through the media, through other kinds of writing and blogs.

I think to be an educated person in the 21st century we need to have not just basic math, basic English, basic geography, but also basic genomics. I think that is going to happen. People are beginning to see the fascinating and complicated ways in which we’re impacted by our own DNA and we’re moving away from these old, useless ideas like ‘Nature vs. Nurture,’ which are so general as to be pointless, and are often very ideologically shaped as well.

WSF: At one point in the book, you discuss Marshall Duke’s work: specifically the idea that children with more knowledge of their family history demonstrate greater personal strength and resiliency. Studies have also shown a genetic predisposition to resiliency, which left us wondering if it’s possible that a sense of kinship also has a genetic link. Do you think that our desire to know where we come from is biologically innate?

CK: I’m reluctant to say that it is somehow encoded in our genes, but social complexity is a very distinctive feature that all mammals have. We are social animals. We have these complicated social lives, whether you’re looking at human beings or baboons or even dogs. That’s clearly somehow in our DNA. Just being mammalian means that we care about kin in a way that other species don’t. Whether there’s any human-specific biology in that as well, I’m not so sure. I think being a mammal gets us a long way along that track.

WSF: You discuss some of the genes (and the related traits) that we have lost through time. It seems almost like our genes follow a use-it-or-lose-it pattern. Is that true?

WSF: The more common way to conceptualize it is that there’s an adaptation—something is added on and it serves you and therefore it is passed down the line. We think less about what we lose.

WSF: In your chapters dedicated to genetic testing, you note that in 2003, we could read about 175 genetic markers on the autosome (the 22 human chromosomes that aren’t sex chromosomes); now the number or markers we can read is around 1 million. What do you see happening in the next ten or so years? Will our ability to read the genome increase at the same pace, and what impact will that have?

CK: The growth in what we’ve been able to look at is so extraordinary and so exciting. In 2003, I don’t think people would have been able to imagine that we’d be where we are now, in terms of both how many markers we can read and how relatively little it costs. There’s an interesting debate around whether we’re going to go to whole genome sequencing or not. It may be the case that it’s just easiest to do that in the end. But people also argue that the markers these companies are looking at now are the most informative ones for their purposes, and I think that’s going to be refined more and more over the next five to ten years. It may be that we continue to look at around this relative number of markers, but it tells us everything we need to know.

Check out this excerpt from ‘The Invisible History of the Human Race’ about the many stories our DNA can tell us about our pasts:

In medieval times monks wrote on animal skins, and when they needed more vellum they scraped the original writing from old texts and wrote over it. With the help of modern technology it is often possible to make out not just the monk’s final words but also the earlier ones because of the traces they left in the vellum. In addition to the story told by the words, the way they were layered over one another also tells a story. These documents are called palimpsests, and now scientists have learned how to read another layer in them by analyzing the DNA of the vellum so as to learn when the animal whose skin it once was lived.

Our DNA is a palimpsest too, and thousands of stories have left their traces in our personal genome. As humanity evolved and traveled, and as families do the same, new stories are layered over old ones, and we can learn more by understanding when and how they were written over one another.  (Cultures are palimpsests too. The way we make decisions, such as whom to trust or whether to get divorced, may lead us back to personal events or much larger social events from a long time ago.)

But DNA is not only a record of history; it is also the stuff  of which we are all made—an evolving set of instructions for the construction and operation of our bodies. DNA can shape how we feel, how we behave, and what we look like, and, of course, all of these qualities can shape how people treat us.

DNA and our life experiences make our bodies palimpsests. As we learn how to interpret the body in the context of its genetic code, we begin to understand how the hand of fate, the choices of families, and the enormous journey of DNA through deep time affect our lives right now.

From The Invisible History of the Human Race: How DNA and History Shape Our Identities and Our Futures