Environmental journalist Cynthia Barnett’s new book, Rain: A Natural and Cultural History, examines not only how rain has worked as a driving force of human civilization, but also how we continue to have a contentious yet dynamic relationship with the natural phenomenon. Barnett waxes poetic about everything from the joy of rain in the very beginning of Earth’s existence to the way we ourselves have evolved for the rain. We spoke with her on a cloudy day about California’s rain problem, cloud seeding, the creation of the modern raincoat, and the scent of rain.

World Science Festival: What are some examples of how we try to deal with and harness the rain?

Barnett: One thing I’ve been thinking a lot about in that context is the microcosm of rain in Los Angeles. I wrote about the drastic fluctuations of rain over thousands of years of human history and how it influenced human settlements and collapse. And it’s really interesting to look at that in the shorter-term history of modern LA. The city was built in the late 19th and early 20th centuries to absolutely banish rain. In every generation, the cities and the homes would flood, and people would be killed until modern flood control came and harnessed the Los Angeles River and built flood-control dams. LA, the same city that dealt with frightening flooding in another time, is now dealing with the most epic drought that has ever settled on that number of people living in the same place.

One theme of the book is that we’ve always tried to change the rain or harness or influence it. In earliest times we would pray to rain gods, and in modern times, people started trying to control the rain. China has the largest cloud seeding project in the world. Our need to have control over the rain can be as small as the raincoat and as big as China trying to blast rain out of the skies before the Beijing Olympics.

WSF: What do you think of the idea of California’s “last year of water”?

Barnett: Rain is stored in natural aquifers underground and human-made reservoirs above ground. That op-ed, written by Jay Famiglietti, was about surface water storage. But some headlines (see also here and here) said that LA has one year of water left. It’s not that we would ever run out of water. The rain that has fallen in California could’ve been used as drinking water or the like, but instead it ran into massive storm drains and flowed out to sea.

We have to live differently with our water, and that includes the rain. We have to restore our relationship with the atmosphere. Of course we’ve never really been ever to control the rain. If China could really control when and where it rains, they would not be dealing with the intensity of the drought. Sort of a sign of our hubris—thinking we’re able to control nature. A story that repeats in our environmental history is that we’re always moving to make water or move against it. It did turn out we could change the climate, but it wasn’t the way anyone would’ve intended.

WSF: How can something be made waterproof?

Barnett: When the Europeans came to Mexico to do scientific research, they saw how the natives there already knew how to make rainproof garments in the 17th century. They were tapping milky sap from the trees growing in the southern jungles called caoutchouc. Our name for it is latex.

The funny thing about it is that Europeans worked for a very long time to try to create their own rubberized material. Charles Mackintosh, a chemist in Glasgow, had been working on taming rubber into a waterproofing varnish, and it was really hard because the rubber was stinky, sticky, and never anything you would want to wear. But finally the winning recipe turned out to be picking this horrible substance called naphtha, which was actually used to create weaponry. Again, because it was so smelly and stinky, the brilliant idea he had was to rub this stuff between two pieces of fabric like a sandwich and roll it out flat. This is how he ultimately invented waterproof cloth and more importantly the raincoat. He is, of course, the father of the Mackintosh raincoat.

WSF: What is particularly unique about American rain?

Barnett: Our country has a wet eastern half and a dry western half, incredibly different climates in one nation. And yet, if you look at agriculture, you see we grow oranges in both Florida and California, we grow rice, corn, soy beans, and alfalfa in some of the driest parts of the country.

When it comes to coming up with solutions to the epic droughts in the West, one of the ideas will be figuring out how to grow the right crops in the right parts. And that’s really controversial, because some farmers have been growing almonds in California or alfalfa in the desert for a very long time. We might not be able to do that anymore because it might be too costly and too intense to move water to some of those fields.

The hubris was really set during times of homesteading and settlement. Thomas Jefferson had this really idealistic vision that American farmers could move west and fill in the country with little farms and be self-sufficient. And what he didn’t realize was that there wasn’t enough rain east of the 100th. And ultimately that’s not going to sustain us.

WSF: Can you talk about the smell of rain?

Barnett: Technically, the scent of rain is tied to organic compounds that build up in the atmosphere, including terpenes, which are secreted by plants. These are the major components of turpentine and resin, the essence in essential oils—that great fresh smell that you smell from pine, the cool in peppermint, or the spice in ginger. They form the blue haze that hangs over the Blue Ridge Mountains in Virginia.

Everyone knew rain had a scent and it’s especially strong in the world’s most arid parts, where it doesn’t rain for a long time, so when it finally does, there’s just an absolutely heady scent. In our desert Southwest, when our monsoons come to the United States, there’s this wonderful smell of sagebrush released.

And so in the 1960s a pair of Australian scientists linked the scent of rain to the terpenes that build up on the land over time. They proposed the name petrichor. But they weren’t the first to discover it—it was already well-known in India. To this day, villagers in a historic, fragrance-making village called Kannauj in northern India dig up the scent of petrichor from the earth on the eve of the monsoons and distill it and bottle it in a wonderful rain perfume. It is called mitti attar. 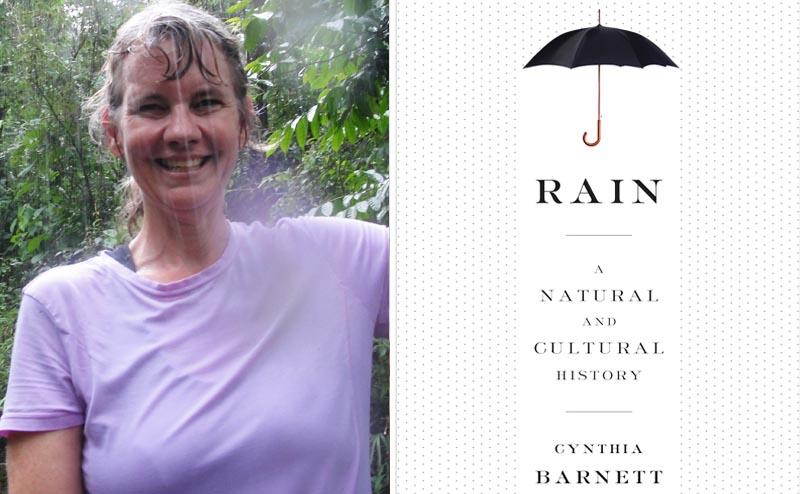 In this excerpt from Rain, Cynthia Barnett explains how neurobiologist Mark Changizi realized the real reason humans get “wet wrinkles” in their fingers:

“An automatic physical trigger to water suggested to Changizi that they must be some sort of adaptation. Primates would not have evolved to deal with porcelain bathtubs or Olympic-sized swimming pools. But they would have had to adapt to rain.

“Changizi had a new grad student, Romann Weber, working in his Boise, Idaho, lab and asked him: ‘Can you think of a good reason to get pruny in the rain?’ Weber gave it some thought. ‘Rain treads?’

“In dry conditions, smooth tires like those on race cars provide the best grip. On wet roads, though, rain treads handle much better. Changizi and Weber hypothesized their smooth fingertips likewise gave humans the best grip in dry times, but wrinkly ones might help us hang on when it’s wet. Their subsequent research indicates that’s true, and, moreover, that human evolution appears to have gone a step further to best the rain.

“Magnified, our finger wrinkles look like drainage channels: rain chiseling a landscape for thousands of years. They are not perfectly circular, but flow downward like a river branching into an estuary. The channels move farther apart as they flow down, like mountains topography shaped by streams flowing toward the sea. The channels are also pliable—so pressing your finger on a surface squeezes water out through them.

“The wrinkles appear nowhere else on our bodies but the hands and feet. They form quickly enough to gear up for rainy conditions, but not so fast that casual contact with water, such as eating fruit, shrivels us up. All in all, Changizi believes, these are clues to an ancient adaption for gripping in the rainy forests where human ancestors lived some 10 million years ago.”

Note: This article was updated on 4/21/2015 at 3:38 p.m. to correct the name of the Indian fragrance-making village from Meghalaya to Kannauj.