It has been eight years since the Tohoku-Oki earthquake struck off the coast of Japan, causing a massive tsunami that overwhelmed Japan’s seaside Daiichi power station, leading to a partial meltdown. Enough time has passed to take a sober look at how the disaster unfolded, whether cleanup efforts are sufficient, and most importantly, how we can prevent something like this from happening again. To do that, we need to understand.

We reached out to Dr. David Brenner, professor of Radiation Biophysics and Director of both the Center for Radiological Research and Columbia University Radiological Research Accelerator Facility; Dr. Heather Savage, Lamont Assistant Research Professor in Seismology, Geology, and Tectonophysics at the Lamont-Doherty Earth Observatory; and Michael Corradini, mechanical and nuclear engineer and professor at the University of Wisconsin, Madison. In our four-part series you’ll find an analysis of the earthquake and tsunami “one-two punch” that ravaged Fukushima, an explanation of how nuclear reactors work and what happens during a meltdown, a breakdown of the cleanup process and the biggest concerns, and the realistic risks of radiation exposure—both generally and in this particular scenario.

First Things First: How Does a Nuclear Plant Work?
The chain of events that led to the Fukushima multi-reactor meltdown has been heavily covered. We wanted to offer the science behind the events—to explain why things happened as they did. But before we go into what went wrong, it might be helpful to understand what “right” looks like.

Nuclear reactors undergo a surprisingly simple process to generate power. In fact, it’s quite similar to the process for coal-driven plants: Water is heated to make steam, and the steam drives a turbine to produce electricity. The key difference is how the heat is created. In a nuclear power plant, the heat to make steam is produced through nuclear fission, when an atom is split into two and releases energy.

The atoms being split in today’s nuclear plants are those of the metal uranium. Natural uranium, which is relatively abundant, is a composite of two isotopes: It’s 99.3% uranium-238 and .7% uranium-235. “A nuclear reactor can’t operate with natural uranium,” explains Dr. David Brenner, Director of the Center for Radiological Research and a radiation biophysics professor at Columbia University. “It has to have a bigger proportion of uranium-235 to operate…uranium-235 is the relevant nuclear fuel.” The uranium-235 must be boosted up from its natural .7% concentration to about 3%, through a process called enrichment. (Weapons-grade uranium has to be enriched further still, which is why there is so much international concern about which powers have enrichment capabilities.)

It’s worth noting that uranium undergoes spontaneous fission all the time, and emits radiation in the process, but it does so at a very slow rate. When nuclear power plants induce fission to create heat and energy, they are simply speeding up the process through a “chain reaction” process. The enriched uranium is pressed into fuel pellets and placed into thin rods, roughly “the diameter of a pencil and about couple of meters long,” as Dr. Brenner described. 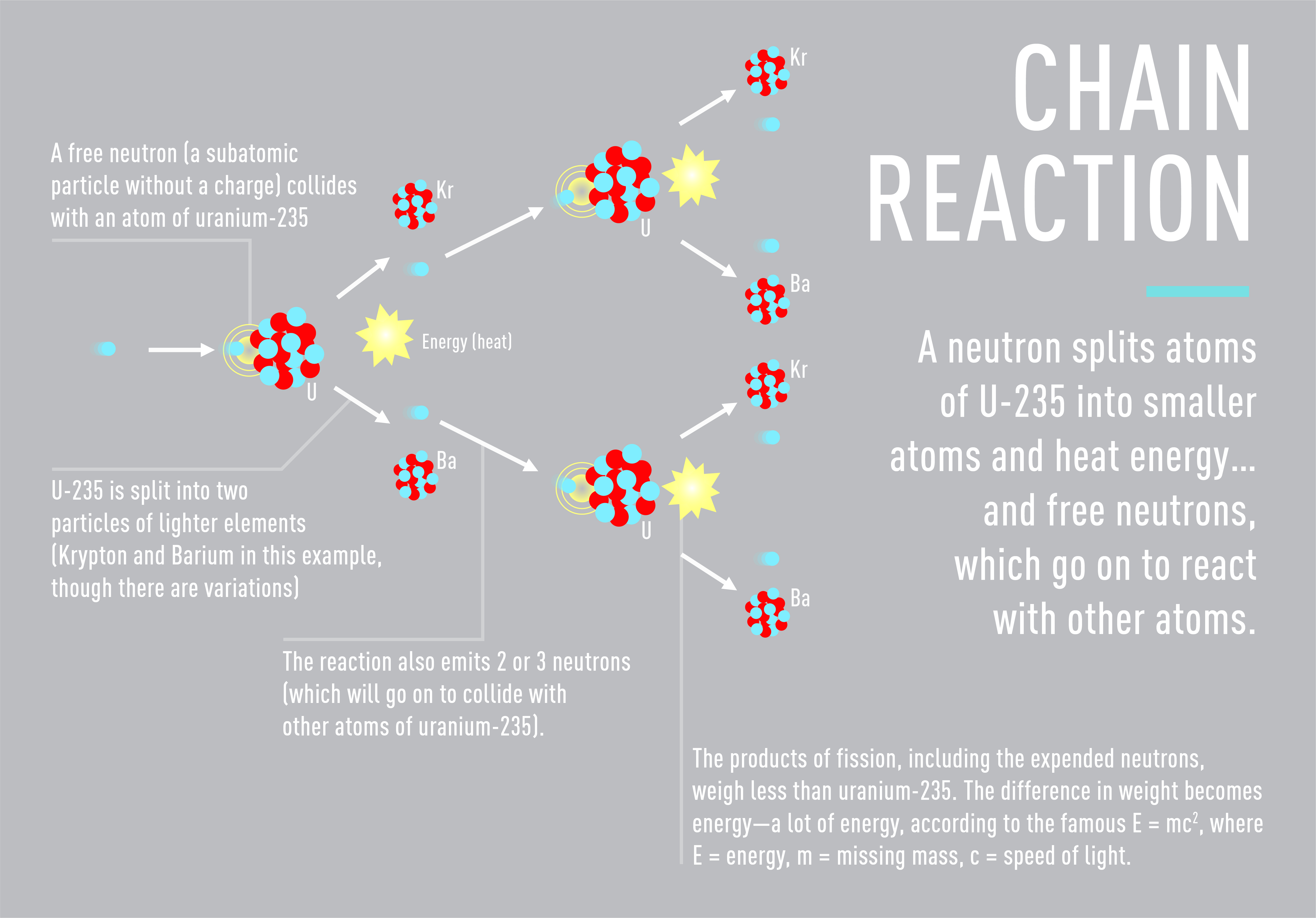 Click here to enlarge
The rods are coated in zirconium, a metal that absorbs relatively few of the neutrons produced in a fission reaction and is highly resistant to heat and chemical erosion. An assembly of about 200 of these rods becomes what’s called the “nuclear core” of the reactor, and atom-splitting neutrons are fired into the core. When an atom of uranium-235 is split (into one Barium and one Krypton atom), the reaction releases energy, heat, and neutrons that then are free to collide with other uranium-235 atoms. A chain reaction begins, and—when carefully controlled, as with interfering “control rods” that can be inserted into the core to slow down a potentially runaway chain reaction—the result is exploitable nuclear energy.

This is the first post in a four-part series on the Fukushima disaster and the science behind what happened. Read Part 2: The Earthquake and The Tsunami—The Perfect Storm here.