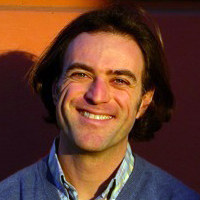 Andrea Pocar was born and raised in Milan, Italy, where he completed his ‘Laurea’ degree in physics in 1996, working on prototype silicon pixel detectors for the ATLAS experiment at CERN. After spending one year at UC Santa Cruz working on the silicon detectors of the GLAST/Fermi-LAT gamma-ray telescope, he moved to Princeton where he completed his PhD in physics with a dissertation on the Borexino solar neutrino experiment under the mentorship of Frank Calaprice. In 2004, Pocar moved to Stanford as a postdoctoral fellow, joined the Giorgio Gratta’s Enriched Xenon Observatory group, and was in charge of the inner detector of the EXO-200 neutrino-less double beta decay experiment.
He joined the physics faculty at UMass-Amherst in 2009, where his research in experimental nuclear/particle physics includes searches for neutrino-less double beta decay (EXO-200/nEXO program), for weakly-interacting dark matter particles (DarkSide program), and solar neutrinos (Borexino).