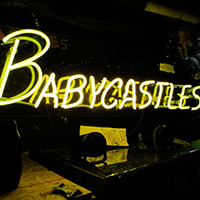 The Babycastles story has been one of opening new cultural territory for independent video games by inserting them aggressively into new spaces. This includes DIY punk-houses, Brooklyn music culture, art galleries, wearable games dance parties, the Museum of Modern Art, the Museum of Natural History, Occupy Wall Street, public art space in New York City, Roger Ebert’s EbertFest, and La Gaite Lyrique in Paris. As a result of a similar worldwide emergence of cultural movement in games, there is a huge new excitement for video games as an art form. It is heart-warming to sit in a room with Tony Conrad, a pioneer of conceptual film & music, and hear him say that games are the biggest thing. A growth of influences, very different kinds of artists, large and small systems of financial support, ever-growing academic validation, are all beginning to commit to a serious pursuit of the medium.