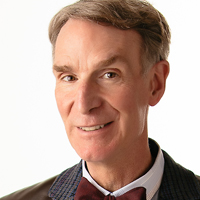 Bill Nye is a science educator, mechanical engineer, New York Times bestselling author, and the creator and host of the Emmy award-winning syndicated television show Bill Nye the Science Guy. In his role as the Science Guy, Nye helped introduce the millennial generation to science and engineering in an entertaining and accessible format, fostering an understanding and appreciation for the science that makes our world work. Today, Nye is a respected champion of scientific literacy, who has challenged opponents of evidence-based education and policy on important topics like climate change and evolution. He currently serves as the CEO of The Planetary Society, the world’s largest and most influential non-profit space organization, co-founded by Carl Sagan. This spring, Nye made his highly anticipated return to the screen in the new Netflix series Bill Nye Saves the World. His middle-grade book series Jack and the Geniuses is a New York Times Bestseller.