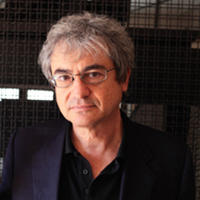 Carlo Rovelli is a theoretical physicist in the field of quantum gravity and in the history and philosophy of science. He is a co-founder of the loop approach to quantum gravity and an author of several books including Quantum Gravity, Covariant Loop Quantum Gravity, The First Scientists: Anaximander and His Legacy and Seven Brief Lectures on Physics, and The Order of Time, which was named one of TIME’s Ten Best Nonfiction Books of the Decade after its publication in 2018. After earning his Ph.D. in physics at the Università of Padova, Rovelli held several faculty appointments in the U.S. and Europe before landing at the Aix-Marseille University in France, where he currently serves as the director of the Quantum Gravity Group of the Center for Theoretical Physics. A member of the Institut Universitaire de France and the International Academy of the Philosophy of Science, he is also an honorary professor at the Normal University of Beijing. In 2019, Foreign Policy magazine included Rovelli in its list of the 100 most influential global thinkers.