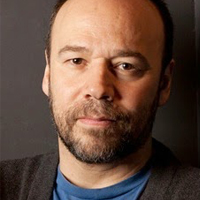 Danny Burstein is a native New Yorker who got his Equity card at 19 and has been working ever since in summer stock, regional theatre, movies, television and on and off Broadway. He played Luther Billis in the Broadway revival of South Paciﬁc at Lincoln Center Theater, for which he received a 2008 Outer Critics Circle Award and Tony and Drama Desk Award nominations. Burstein was also nominated for a 2006 Tony Award for the role of Aldolpho in the original Broadway production of The Drowsy Chaperone. He spent three seasons as an original company member of Tony Randall’s National Actors Theatre, where his credits included Three Men on a Horse(with Jack Klugman and Tony Randall), Saint Joan (with Maryann Plunkett and John Neville), The Seagull (with Jon Voight and Tyne Daly), A Little Hotel on the Side (with Lynn Redgrave), and The Flowering Peach (with Eli Wallach and Anne Jackson). Other Broadway credits include A Class Act, Titanic and Company. His film and television credits include Boardwalk Empire (directed by Martin Scorsese), Transamerica, Duane Incarnate, Deception, all three versions of Law & Order, Ed, Conviction, Hope & Faith and the BBC hit Absolutely Fabulous.