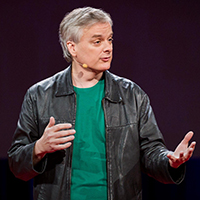 David Chalmers is a philosopher of the mind and the brain. He is especially well-known for his work on consciousness. His formulation of the “hard problem” of consciousness inspired Tom Stoppard’s play, The Hard Problem. Chalmers co-founded the Association for the Scientific Study of Consciousness and has organized some of the most important conferences in the field. He also works on issues about artificial intelligence and the extended mind, focusing on the way that the technology we use extends our minds into the world. He is currently writing a book about philosophical issues arising from virtual reality.