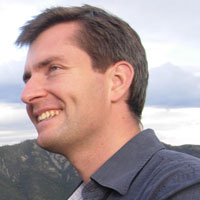 David Charbonneau has been called a “celestial detective” for his systematic search for planets orbiting nearby sun-like stars. Uncovering the secrets of these exoplanets, as they’re called, could conceivably lead to the first direct evidence of life beyond Earth. Dr. Charbonneau is developing novel techniques to discover and investigate these distant worlds. In 1999 he used a 4” telescope in a parking lot in Boulder, Colorado, to make the first detection of an exoplanet eclipsing its parent star. He has also used both the Hubble and Spitzer Space Telescopes to uncover more about these potentially habitable planets. A Professor of Astronomy at Harvard, Dr. Charbonneau is also a member of the NASA Kepler Team in the search for planets similar to Earth—specifically, terrestrial planets in their sun’s hospitable zone where liquid water and life might exist—and director of the MEarth Project. His many honors include the 2009 National Science Foundation’s Alan T. Waterman award, the nation’s highest award for scientists under 35 and Discover Magazine’s Scientist of the Year for 2007.