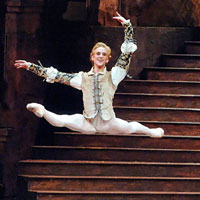 David Hallberg has danced the title role in Apollo, Solor in La Bayadère, Albrecht in Giselle, Romeo in Romeo and Juliet and George Balanchine’s Tchaikovsky Pas de Deux, among many others, for the American Ballet Theatre. He joined ABT’s Studio Company (now ABT II) in September 2000 and then joined American Ballet Theatre as a member of the corps de ballet in April 2001. He was promoted to Soloist in January 2004 and Principal in May 2005.

During the fall of 2008 and 2009, Hallberg was a member of Kings of The Dance, which toured Russia, Ukraine, Latvia and Estonia, and he has been a guest artist with many companies including the Royal Swedish Ballet, Teatro Colon in Buenos Aires and the Kiev Ballet. He has danced at galas throughout the world from Japan to the Bolshoi Theatre in Moscow. Hallberg was a recipient of the Princess Grace Fellowship and the Chris Hellman Dance Award for 2002-2003. He received a nomination for the Benois de la Danse Award in 2006.