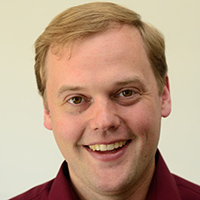 Edwin Olson is an assistant professor of computer science and engineering at the University of Michigan. His research focuses on autonomous robots, ranging from self-driving cars to teams of robots that work together to perform search and rescue missions. He received a Ph.D. from the Massachusetts Institute of Technology in 2008 for his work in robust robot mapping.

In 2010, he led the winning team in the MAGIC 2010 competition by developing a team of 14 robots that semi-autonomously explored and mapped a large-scale urban environment, winning $750,000. In 2007, he worked on MIT’s autonomous car which finished fourth in the DARPA Urban Challenge. In September 2012, he was named one of Popular Science’s “Brilliant Ten.” His academic papers have been cited over 1,000 times, and his open-source software has been widely distributed.