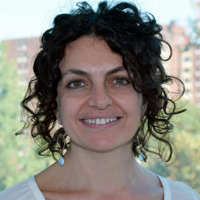 Elisa Riedo, PhD joined the CUNY Advanced Science Research Center’s Nanoscience Initiative in August 2015. She completed both her B.S. and Ph.D. in Physics at the University of Milan and held a postdoctoral fellowship at the Ecole Polytechnic Federale Lusanne in Switzerland. Riedo previously taught at the Georgia Institute of Technology where she served as Professor of Physics. She is particularly well known for her pioneering work in thermochemical nanolithography, a technique used to create nanoscale chemical patterns with applications in biomedicine, nanoelectronics, and magnetic materials. She has also made fundamental contributions to physics and chemistry at the nanoscale, including insights into nano-mechanics and the properties of water confined in nano-spaces, relevant in all living systems. She is widely published, has received multiple grants from the National Science Foundation and the Department of Energy, and is a Fellow of the American Physical Society. Riedo is also a professor in The City College of New York’s Department of Physics.