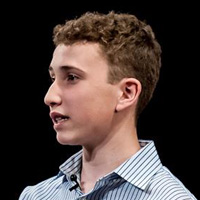 Ethan Brown is a 12-year-old “Mathemagician.” After watching an online video of Arthur Benjamin’s performance at TED, Ethan was inspired to learn the art and science of performing Mental Mathematics on stage. He began with a 5th-grade talent show in May 2010 and only 1 month later joined Benjamin onstage at The World Science Festival in NYC. Since then, he has performed at The Chicago Toy and Game Fair, The World Science Festival Street Fair, Skepticamp, Boston Skeptics, and various schools throughout Connecticut. Ethan loves showing people how math can be fun and entertaining. He also writes his own blog and runs his own website.

Brown recently set the world record for reciting tau (2π) to 2000 digits from memory.