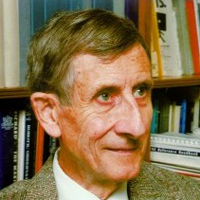 Freeman Dyson, born and raised in England, excelled in all subjects from a very young age, going on to specialize in mathematics and theoretical physics in his studies at the University of Cambridge. Moving to the United States in 1947, he continued his research first at Cornell University in Ithaca, New York, and then at the Institute for Advanced Study (IAS) in Princeton, New Jersey.

Dyson’s contributions to research span a wide variety of fields, including quantum theory, nuclear engineering, biotechnology, and pure mathematics. Particularly notable is his work on quantum electrodynamics, the first example for the type of theory currently used to describe the physics of elementary particles. He was also the co-author of a seminal publication showing how the fact that atoms can combine to form solid bulk matter follows from a fundamental principle of quantum mechanics.

Now retired, he remains professor emeritus at IAS. Dyson is a prolific writer, publishing many books and collections of his thoughts about technology, science, and the future. He serves as the director of the Space Studies Institute, a nonprofit private research organization, also in Princeton. His work has earned him numerous accolades, including the 1996 Lewis Thomas Prize and the 2000 Templeton Prize.