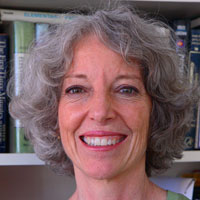 Glennys Farrar is a collegiate professor of physics at New York University. She has made seminal contributions to theoretical particle physics, including demonstrating that quarks are not just mathematical constructs but are actually physically present in matter and pioneering the search for supersymmetry (which provides the most popular candidate for dark matter and is a prime objective of the Large Hadron Collider). Farrar is particularly interested in the connection of dark matter to other puzzles in physics, such as the excess of matter over anti-matter—without which the Universe would be devoid of galaxies, stars and life—and the possibility that dark matter is actually ordinary matter on a “brane” separated from our own in some unseen, “extra” dimension. Farrar also uses astrophysics and cosmology to address such fundamental questions. She and a graduate student are currently exploring the possible existence of a new force that may act on dark matter particles but not ordinary matter, by analyzing observations of the merger of two massive clusters of galaxies. Recently, she and her collaborators achieved the first optical detection of the “stellar tidal disruption” phenomenon, with two examples of supermassive black holes tearing a passing star to shreds, releasing a brilliant burst of light that lasts a few months. Further study of this phenomenon promises to elucidate important questions in cosmology, astrophysics and physics.

The first woman to get a Ph.D. in physics from Princeton University, Farrar served as chair of the Physics Department at NYU and was founder and first director of its Center for Cosmology and Particle Physics. She has been a member of the Institute for Advanced Study at Princeton and on the faculty of Caltech, has spent sabbatical years at CERN, Princeton, and Harvard among other appointments, and serves on numerous advisory panels and editorial boards.