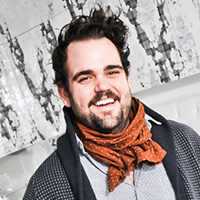 Gregory Hildreth has appeared in Broadway shows such as Cinderella, Peter and the Starcatcher, and Bloody Bloody Andrew Jackson. His Off-Broadway credits include roles in Peter and the Starcatcher (New York Theatre Workshop), and Bloody Bloody Andrew Jackson (The Public Theatre). Hildreth has appeared in NY Theatre shows such as Hell House and Dance Dance Revolution (Les Freres Corbusier), and has performed in regional theaters such as the La Jolla Playhouse, Center Theatre Group, Williamstown Theatre Festival, Huntington Theatre, New Repertory Theatre, and Weston Playhouse. His film and television credits include Wall Street: Money Never Sleeps, The Good Wife, Royal Pains, Kings. Hildreth has a BFA in Acting from Boston University and the London Academy of Music and Dramatic Arts.