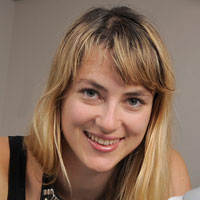 Heather Knight is an electrical engineer and social roboticist who is an Assistant Professor of Computer Science at Oregon State University and Director of CHARISMA Research Lab, (Collaborative Humans and Robots: Interaction, Sociability, Machine Learning, and Art). She also runs Marilyn Monrobot, a robot theater company with comedy performances and an annual Robot Film Festival. Her previous work includes robotics and instrumentation at NASA’s Jet Propulsion Laboratory, interactive installations with Syyn Labs (including an award-winning Rube Goldberg Machine music video with OK GO), electrical engineering at Aldebaran Robotics, and she is an alumnus from the Personal Robots Group at the MIT Media Lab.

Her installations have been featured at the Smithsonian-Cooper Hewitt Design Museum, TED, Pop!Tech, LACMA, SIGGRAPH and the Fortezza da Basso in Florence, Italy. She is also the Assistant Director of Robotics at Humanity+ and a fellow at the Hybrid Realities Institute and a National Science Foundation (NSF) Fellow.