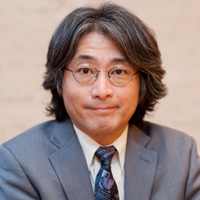 Hitoshi Murayama is a theoretical physicist who works on the connection between the physics of the small (elementary particles) and the large (the Universe). In addition, he worked on a neutrino experiment and is currently leading a team of astronomers. He received his Ph.D. from University of Tokyo, had research positions at Tohoku University and Lawrence Berkeley National Laboratory, and has been on faculty at University of California, Berkeley. He is also a founding director of the Kavli Institute for the Physics and Mathematics of the Universe at the University of Tokyo. He received Yukawa Commemoration Prize in 2002 and a Humboldt Research Award 2017. He is a member of American Academy for Arts and Sciences as well as Science Council of Japan.