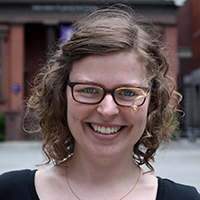 Holly Robbins is a recent graduate of NYU’s master’s program in media culture and communication. Her research area is human computer interaction with a special focus on qualitative methodologies from anthropology. Robbins works with NYU-Poly’s game innovation lab integrating ethnography and social theory into developing new technologies. In addition to her lab work, Robbins is a freelance user research, user experience, and interaction design consultant. She earned her B.A. from Sarah Lawrence College in 2007 with a concentration in anthropology. Prior to pursuing her graduate degree, she served as a political research analyst for an embassy in Washington, DC.