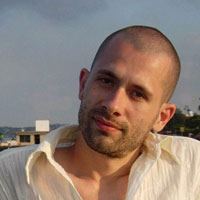 Danish sound artist Jacob Kirkegaard explores sound in art with a scientific approach. He focuses on the scientific and aesthetic aspects of resonance, time, sound and hearing. His installations, compositions, and performances deal with acoustic spaces and phenomena that usually remain imperceptible. Using unorthodox recording tools, including accelerometers, hydrophones, and home-built electromagnetic receivers, Kirkegaard captures and contextualizes previously unheard sounds from within a variety of environments: a geyser, a sand dune, a nuclear power plant, an empty room, a TV tower, and even sounds from the human inner ear itself.

For the last 15 years, Kirkegaard has presented his works at exhibitions, festivals and conferences throughout the world, including Club Transmediale in Berlin, James Cohan Gallery and Diapason in New York, Museum of Jurassic Technology in Los Angeles and Museum of Contemporary Art in Denmark. He has released five albums, predominately on the British label Touch, and is a member of the sound art collective freq_out.