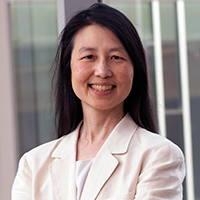 Jeannette M. Wing is Avanessians Director of the Data Science Institute and professor of computer science at Columbia University. Wing is also adjunct professor of computer science at Carnegie Mellon where she twice served as the head of the computer science department and had been on the faculty since 1985. Previously, she was a Corporate Vice President of Microsoft Research and an Assistant Director of the Computer and Information Science and Engineering Directorate at the National Science Foundation. Wing’s general research interests are in the areas of trustworthy computing, specification and verification, concurrent and distributed systems, programming languages, and software engineering. Her current interests are in the foundations of security and privacy, with a new focus on trustworthy AI. She was or is currently on the editorial boards of twelve journals, including The Journal of the ACM and Communications of the ACM. She is currently a member of the National Library of Medicine Blue Ribbon Panel; the Science, Engineering, and Technology Advisory Committee for the American Academy for Arts and Sciences; the Board of Trustees for the Institute of Pure and Applied Mathematics; the Advisory Board for the Association for Women in Mathematics; and the Alibaba DAMO Technical Advisory Board. She has been chair and/or a member of many other academic, government, and industry advisory boards. She received the CRA Distinguished Service Award in 2011 and the ACM Distinguished Service Award in 2014. She is a Fellow of the American Academy of Arts and Sciences, American Association for the Advancement of Science, the Association for Computing Machinery (ACM), and the Institute of Electrical and Electronic Engineers (IEEE). Wing received her SB, SM, and PhD degrees in Computer Science, all from the Massachusetts Institute of Technology.