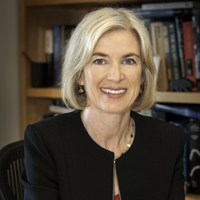 As an internationally renowned professor of Chemistry and Molecular and Cell Biology at U.C. Berkeley, Jennifer Doudna and her colleagues rocked the research world in 2012 by describing a simple way of editing the DNA of any organism using an RNA-guided protein found in bacteria. This technology, called CRISPR-Cas9, has opened the floodgates of possibility for human and non-human applications of gene editing, including assisting researchers in the fight against HIV, sickle cell disease and muscular dystrophy. Doudna is an investigator with the Howard Hughes Medical Institute, senior investigator at Gladstone Institutes, and the Executive Director of the Innovative Genomics Institute. She is a member of the National Academy of Sciences, the National Academy of Medicine, the National Academy of Inventors, and the American Academy of Arts and Sciences. Doudna is also a Foreign Member of the Royal Society and has received numerous other honors including the Breakthrough Prize in Life Sciences, the Japan Prize, and the Kavli Prize. She is the co-author of A Crack in Creation, a personal account of her research and the societal and ethical implications of gene editing. She is a vocal proponent of its responsible use, first calling for a moratorium on using CRISPR technology to make permanent changes to the human germline in 2015.