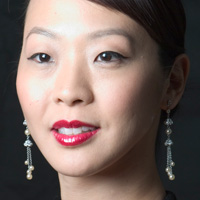 Hailed by Time Out New York as “one of New York’s most reliably adventurous performers”, violinist Jennifer Choi has charted a career that breaks through the conventional boundaries of solo violin, chamber music, and the art of creative improvisation. A prominent chamber musician and solo performer, Jennifer is regularly sighted in performances of rare works that stretch the limits of violin playing often calling for extended techniques, improvisation, and the use of electronics. She can be heard on over a dozen albums for TZADIK record label in compositions by new music icons such as John Zorn, Elliott Sharp, Wadada Leo Smith, and the Susie Ibarra Trio, and on her debut solo album, VIOLECTRICA-Works for Solo Violin and Electronics. Choi was former violinist of the Miró String Quartet, and with her involvement, the group won Grand Prize at the 1996 Fischoff and Coleman chamber music competitions. Since then, she has performed for the Chamber Music Society of Lincoln Center, Ravinia Festival, Barge Music, Caramoor Music, and other chamber music series across the United States. Currently, Jennifer is the violinist of Classical Jam, the Either/Or Ensemble, the Susie Ibarra Quartet, Anti-Depressant Duo with Kathleen Supové and the newest member of ETHEL.

She has performed worldwide in venues like the Library of Congress in Washington D.C., Alice Tully Hall in New York City, and the RAI National Radio in Rome. During the 2009-2010 season, she served as Concertmaster for Lincoln Center’s National touring production of Roger’s and Hammerstein’s South Pacific.