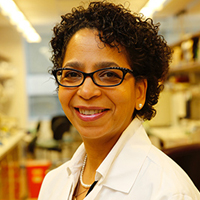 Jill Bargonetti, a renowned cancer researcher, earned her B.A. at SUNY College at Purchase and her Ph.D. at New York University and did postdoctorate work at Columbia University. She serves as chair of the molecular, cellular, and development subprogram in the Ph.D. Program in Biology at the Graduate Center and as professor of biological sciences at Hunter College. Since 1994, she has been running the Bargonetti Lab at Hunter College, where her team is using genetically engineered tools to research breast cancer. A current standing member of the Tumor Cell Biology study section grant review panel for the National Institutes of Health (NIH), Bargonetti has published her research in prestigious scientific journals, has received research grants from the National Science Foundation and the NIH, and is an innovator in the education of minorities in science. Her awards include a Young Investigator Award (given by the mayor of New York City); the 1998 New York Voice Award; the 1997 Kathy Keeton Mountain Top Award from the New York branch of the NAACP; the Presidential Early Career Award for Scientists and Engineers, from President Bill Clinton in 1997; the New York City Mayor’s Award for Excellence in Science and Technology; the Outstanding Woman Scientist Award from the Association for Women in Science; the Breast Cancer Research Foundation Award; and the 2005 NYU Graduate School of Arts and Science Alumnae Achievement Award.