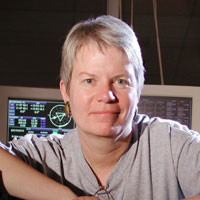 Jill Tarter has devoted her career to hunting for signs of sentient beings elsewhere through a systematic search for radio signals from Earth’s galactic neighbors. She has received wide recognition in the scientific community, including the Lifetime Achievement Award from Women in Aerospace, two Public Service Medals from NASA and a 2009 TEDPrize. In 2004, TIME magazine named her one of the TIME 100 most influential people in the world, and she was portrayed by Jodie Foster in the movie Contact. Tarter holds the Bernard M. Oliver Chair for SETI (Search for Extraterrestrial Intelligence) and is currently Chair Emeritus for SETI Research at the SETI Institute.

Tarter served as Project Scientist for NASA’s SETI program, the High Resolution Microwave Survey, and has conducted numerous observational programs at radio observatories worldwide. Since the termination of funding for SETI in1993, she has served in a leadership role to secure private funding to continue this exploratory science. She also serves on the management board for the Allen Telescope Array, a joint project between the SETI Institute and the UC Berkeley Radio Astronomy Laboratory.