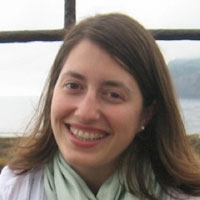 Jocelyn Monroe is an assistant professor of physics in MIT’s Laboratory for Nuclear Science who works on experimental searches for new particles. Her current research focus is on directly detecting dark matter particle interactions with the MiniCLEAN and DMTPC experiments. Monroe was a Pappalardo post-doctoral fellow at MIT until 2009, working on directional dark matter with DMTPC, and on seeking exotic particle participants in solar neutrino oscillations with the SNO experiment. Monroe earned her PhD from Columbia University in 2006; her dissertation research was on the MiniBooNE neutrino oscillation experiment with advisor Professor Michael Shaevitz. In 1999-2000 Monroe held the position of engineering physicist at the Fermi National Accelerator Laboratory, where she studied the physics of muon beam cooling. She earned her BA in astrophysics at Columbia University in 1999.