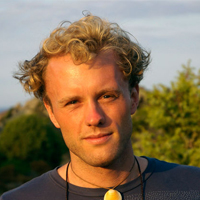 Combining elements of computer science, anthropology, visual art and storytelling, Jonathan Harris designs systems to explore and explain the human world. He has made projects about human emotion, human desire, modern mythology, science, news, anonymity, and language, and documented an Alaskan Eskimo whale hunt. He was commissioned by Yahoo! to build the world’s largest time capsule, and by MoMA to build an interactive installation about online dating. He studied computer science at Princeton University and was awarded a 2004 Fabrica fellowship. The winner of two 2005 Webby Awards, his work has also been recognized by AIGA, Ars Electronica, and the State of Vermont, and exhibited at Le Centre Pompidou and New York’s Museum of Modern Art. He lives and works in Brooklyn, New York.