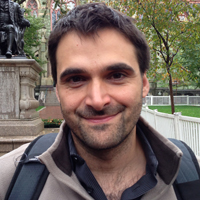 Justin Khoury is a professor of physics and the undergraduate chair of physics and astronomy at the University of Pennsylvania. He obtained his B.Sc. from McGill University and his Ph.D. from Princeton University, under Paul Steinhardt. Following postdoctoral fellowships at Columbia University and the Massachusetts Institute of Technology, Khoury became a faculty member of Perimeter Institute for Theoretical Physics, before moving to the University of Pennsylvania. His awards and honors include a W. M. Keck Foundation Science and Engineering Grant (2017-2019), a New Initiative Research Grant from the Charles E. Kaufman Foundation (2015-2017), a National Science Foundation CAREER Award (2012-17), and an Alfred P. Sloan Foundation Research Fellowship (2010-12). His research lies at the interface of particle physics and cosmology, where he investigates new models and screening mechanisms related to dark matter and baryonic matter. Another central theme of his research is the development of innovative cosmological theories of the very early universe, including the Ekpyrotic Universe.