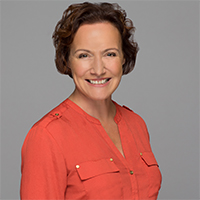 Since 2002, Kim Binsted has been a professor in the Information and Computer Sciences Department at the University of Hawaii, conducting research on human space exploration. Binsted is the principal investigator on the NASA-funded Hawaii Space Exploration Analog and Simulation project (hi-seas.org), which conducts long-duration space exploration simulations. She spent six months in 2016/2017 in Russia on a Fulbright Award, and is an AAAS Science & Technology Policy Congressional Fellow in 2018/2019. She received a BSc in Physics from McGill, and a PhD in AI from University of Edinburgh. She also has an MS in Planetary Geology.