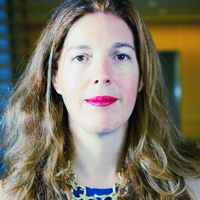 Leslie B. Vosshall is a molecular neurobiologist who studies how behaviors emerge from the integration of sensory input with internal physiological states. She is the Robin Chemers Neustein Professor, Head of the Laboratory of Neurogenetics and Behavior, and Director of the Kavli Neural Systems Institute at The Rockefeller University. Vosshall is known for her work on the genetic basis of chemosensory behavior in both insects and humans. Vosshall received an A.B. in Biochemistry from Columbia University in 1987 and a Ph.D. from The Rockefeller University in 1993. Following postdoctoral work at Columbia University, she joined the Rockefeller faculty in 2000. She is the recipient of the 2008 Lawrence C. Katz Prize from Duke University, the 2010 DART/NYU Biotechnology Award, the 2011 Gill Young Investigator Award. Vosshall is an elected fellow of the American Association for the Advancement of Science, and was elected to the National Academy of Sciences in 2015.