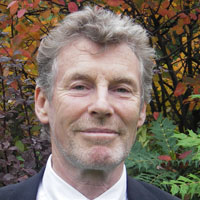 Michael Russell’s research into the emergence of life and early evolution will help determine whether earth alone supports life in our universe. He theorizes that oxygenic photosynthesis, acting upon iron sulfide deposits in volcanic, oceanic vents, allowed the precursors of protein and RNA to form. Dr. Russell’s study of 360-million-year-old mineral deposits in Ireland led to the insight that iron sulphite cells may have provided three-dimensional molds for the first cell walls. His groundbreaking research led to a tour of North America as the Society of Economic Geologists’ distinguished lecturer in 1984. In June 2009, Dr. Russell was awarded the William Smith Medal from the Geological Society of London for his lifetime contribution to applied geology.

Since 2006, Dr. Russell has tested his theory as a NASA Senior Research Fellow at the Jet Propulsion Laboratory, California Institute of Technology, Pasadena. In addition, a number of ongoing international collaborations have bolstered his original narrative of the hydrothermal origin of life as a result of geological, geochemical and tectonic forces. Russell has been featured on two BBC programs, including Origin of Life and Life on Mars.