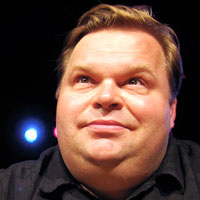 Mike Daisey has been called “the master storyteller” and “one of the finest solo performers of his generation” by The New York Times for his groundbreaking monologues which weave together autobiography, gonzo journalism, and unscripted performance to tell hilarious and heartbreaking stories that cut to the bone, exposing secret histories and unexpected connections. His monologues include last season’s critically acclaimed The Last Cargo Cult, the controversial How Theater Failed America, the six-hour epic Great Men of Genius, the unrepeatable series All Stories Are Fiction, and the international sensation 21 Dog Years. He’s been a guest on the Late Show with David Letterman, as well as a commentator and contributor to WIRED, Vanity Fair, Slate, Salon, and the BBC, and a frequent host and storyteller for the Peabody Award-winning NPR program The Moth Radio Hour. His first film, Layover, was shown at the Cannes Film Festival this year, and a feature film of his monologue If You See Something Say Something is currently in post-production. His second book, Rough Magic, a collected anthology of his monologues was published in 2011. He has been nominated for the Outer Critics Circle Award, two Drama League Awards, and is the recipient of the Bay Area Critics Circle Award, the Sloan Foundation’s Galileo Prize, and a MacDowell Fellowship.