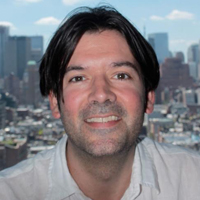 Neal Weiner received his undergraduate degree in Physics and Mathematics from Carleton College and a PhD in Physics from the University of California, Berkeley. After completing his postdoctoral training at the University of Washington, Dr. Weiner joined the faculty of the Department of Physics at NYU in 2004. He has broad interests in particle physics and cosmology. Professor Weiner’s focus is generally on physics beyond the standard model. In this broad field, his work has included studies of dark matter, extra dimensions, supersymmetry, grand unification, flavor, neutrino mass, inflation and dark energy, as well as relationships between the different subjects. Recently, he has been actively engaged in the development of ideas related to “dark sectors” where dark matter has its own interactions beyond gravitational and the implications for the ongoing search for dark matter. Dr. Weiner is currently the Director of the Center for Cosmology and Particle Physics at NYU.