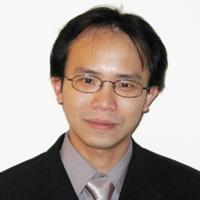 Oki Gunawan is a Research Staff Member at IBM T. J. Watson Research Center, Yoktown Heights, NY. He received his Ph.D. and M.A. from Princeton University in Electrical Engineering. Gunawan’s research areas are semiconductor technology and physics such as nanoscale transistor, solar cell and novel sensors for internet of things technology. He has authored or co-authored more than 50 technical publications and holds 36 US and international patents. Some examples of his recent discoveries and inventions are: a new kind of magnetic trap called “parallel dipole line (PDL)” system that can be used for many sensor applications such as earthquake sensor which has been tested recently in Italy and a unique instrument for semiconductor research and industry called rotating PDL Hall system.