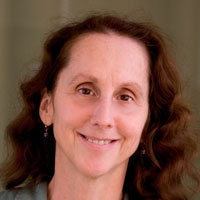 Pamela Bjorkman is the Max Delbrück Professor of Biology and an HHMI investigator at the California Institute of Technology (Caltech) in Pasadena, California. She received a BA degree in Chemistry from the University of Oregon and a Ph.D. degree in biochemistry from Harvard University. As a graduate student and postdoctoral fellow in Don Wiley’s laboratory, she solved the crystal structure of a human histocompatibility complex molecule. She continued her postdoctoral training at Stanford with Mark Davis, where she worked on T cell receptors. Bjorkman is a member of the US National Academy of Sciences, the American Academy of Arts and Sciences, and the American Philosophical Society. She is the recipient of numerous awards for her research, in addition to being named the L’OREAL-UNESCO Women in Science North American Laureate in 2006. Bjorkman received an NIH director’s Pioneer Award in 2010 and was named one of the most powerful moms in Science, Technology, Engineering and Math (STEM) by Working Mother magazine.