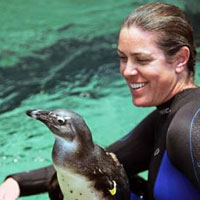 Pamela Schaller Hughes was the primary biologist for a charismatic colony of African penguins and designed and implemented the first-ever penguin wetsuit, which helped a balding bird re-grow his feathers and stay warm. As an aquatic biologist at the California Academy of Sciences’ Steinhart Aquarium, she was part of a team which cared for more than 38,000 live animals; she was also responsible for the husbandry of an array of species, including blacktip and whitetip reef sharks, alligator gars, and dog-faced fruit bats.

Schaller Hughes’ contributions go beyond the animals’ daily care, and have a positive impact on public awareness, and research and conservation of these species in the wild. Through daily public African penguin feedings, she introduces hundreds of museum visitors each week to the species’ life history. In addition, she has published papers on reef shark care and reproduction, raising African wild dogs, and other topics, sharing valuable knowledge with peer institutions.

Leading up to the opening of the Academy’s new facility in 2008, Schaller Hughes helped design new live animal exhibits, and execute the monumental move of thousands of fish, sharks, turtles, birds and other animals into temporary quarters, and later to their new homes.