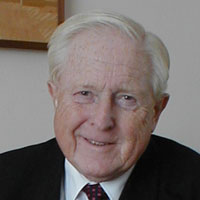 Raymond Gosling pioneered x-ray diffraction research at King’s College London and collaborated closely with Maurice Wilkins in analyzing samples of DNA. Together they produced the first crystalline diffraction photographs at King’s showing an x-pattern of black dots. Gosling was assigned to Rosalind Franklin at King’s in 1951 and she acted as his academic supervisor. During the following two years, they worked closely together to perfect the technique of x-ray diffraction photography of DNA and obtained some of the sharpest pictures from which measurements might be obtained that they hoped would determine the structure of the two principal forms of DNA they had identified—the so-called A and B forms. It was Gosling who took the now famous photograph 51 showing beyond doubt the helical structure of the B form of sodium DNA.

Gosling briefly remained at King’s following completion of his thesis in 1954 before lecturing in physics at Queen’s College, University of St Andrews and in University College of the West Indies, Mona, Jamaica, where he created an animal model (broiler cockerels) for the study of the changes in the elastic structure of the aorta in the early stages of atherogenesis. He was a senior lecturer and later reader at Guy’s Hospital Medical School, London and was appointed professor of Physics Applied to Medicine in the Dept of Radiological Sciences in 1984. On retirement in 1991 he was appointed emeritus professor and has since held visiting professorships at two universities and has been a collaborator in the Oxford Project for Investigation of Memory in the Aged (OPTIMA) at the Radcliffe Infirmary, Oxford University. He retains an active professional involvement in the biophysical aspects of arterial disease.