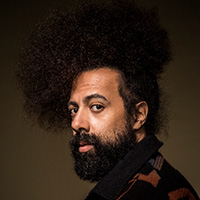 Reggie Watts is an internationally renowned vocal artist, beatboxer, musician, and comedian. He blurs the lines between music and comedy in his live performances, which are 100% improvised. On screen, Watts can currently be seen as the band leader for CBS’s “The Late Late Show with James Corden” and in his Netflix comedy special, “Spatial.” Throughout his life, he has immersed himself in psychedelic experiences which have shaped his expression and allowed him to explore consciousness, personal growth, and the inner workings of his delightfully weird, subversive mind.