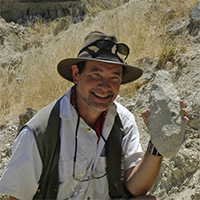 Rick Potts, PhD, heads the Smithsonian’s Human Origins Program at the National Museum of Natural History. Since joining the Smithsonian, Potts’s research has focused on piecing together the record of Earth’s environmental change and human adaptation. He leads excavations at early human sites in the Rift Valley of southern Kenya, including the famous handaxe site of Olorgesailie, Kenya. He has also co-directed projects in southern and northern China that compare evidence of early human behavior and environments from East Africa to East Asia. He received his doctorate in biological anthropology from Harvard University, after which he taught anthropology at Yale University and served as Curator of Physical Anthropology at the Yale Peabody Museum. Potts is curator of the Smithsonian’s Hall of Human Origins, and authored the exhibition companion book, What Does It Mean To Be Human?