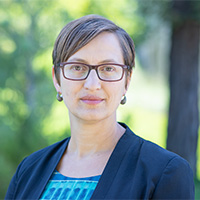 Risa Wechsler is the Director of the Kavli Institute for Particle Astrophysics and Cosmology and an associate professor of Physics at Stanford and the SLAC National Accelerator Laboratory. Her work combines numerical simulations and modeling with data from the largest existing and future galaxy surveys to model and map out the evolution and contents of the Universe from its earliest moments to the present day, to learn how galaxies form and to investigate the nature of dark matter and dark energy. She is playing a leading role in these cosmological surveys, which together are mapping out tens of billions of galaxies over more than 13 billion years of the Universe’s history. Wechsler is a Fellow of the American Physical Society as well as a former NASA Hubble Fellow, and has written about and discussed science in numerous public venues from Teen Vogue to the BBC.