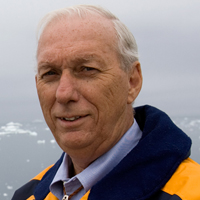 Dr. Robert W. Corell, Vice President of Programs & Policy for The H. John Heinz III Center for Science, Economics, and the Environment is also a Council Member for the Global Energy Assessment and a Senior Policy Fellow at the Policy Program of the American Meteorological Society. Dr. Corell was one of those noted in the Nobel Peace Prize Award in 2007 for his extensive work with the IPCC assessments. In 2005, he completed an appointment as a Senior Research Fellow at the Belfer Center for Science and International Affairs of the Kennedy School for Government at Harvard University. Dr. Corell is actively engaged in research concerned with both the sciences of global change and with the interface between science and public policy, particularly research activities that are focused on global and regional climate change and related environmental issues. He currently chairs an international initiative, the overall goal of which is to strengthening the negotiating framework intended to prevent dangerous anthropogenic interference with the climate system, central to which is the use of policy exercises that employs real-time climate simulations. Corell is the chair of the Arctic Climate Impact Assessment and he chairs an 18-country international planning effort to outline the major Arctic-region research challenges for the decade or so ahead. He lead an international strategic planning group that developed the strategy for and the programs and activities designed to harness science, technology and innovation for sustainable development.

Prior to January 2000, he was Assistant Director for Geosciences at the National Science Foundation where he had oversight for the Atmospheric, Earth, and Ocean Sciences, the NSF’s Polar Programs, and the NSF Global Change Program. While at NSF, Dr. Corell also served as the Chair of the President’s National Science and Technology Council’s committee that has oversight of the U.S. Global Change Research Program and he was chair of the international committee of government agencies funding global change research. Further, he served as chair and principal U.S. delegate to many international bodies with interest in and responsibilities for climate and global change research programs. Dr. Corell is an oceanographer and engineer by background and training, having received Ph.D., M.S. and B.S. degrees at Case Western Reserve University and MIT.